Lets Hear It For The Boy 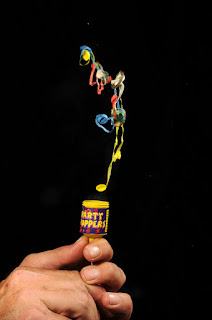 Now, I am not ever claiming to be an expert on treating vaginismus, and all of the experiences in this blog are personal to me. Every woman is different.  BUT, there are a few key things that I would guess are vital to every woman's success in overcoming vaginismus.

Reads a little bit like an advert for the gym, but it's that 'never give up' attitude that will pull you through.

The other thing, that I feel is crucial in all of this, is a supportive partner.  Not every woman with vaginismus is in a relationship of course, but if you are, you're going to need your other half to be with you all the way.  Encouraging you, but never pushing you.  Cheering on your successes, but helping you to move on from the difficult bits.  Really excited about having sex with you, but not putting any pressure on your to hurry up and get your shit together.  I am very lucky to have a husband like this, and thought it would be nice to dedicate a post to him, and our vaginismus journey!

My husband and I met nine years ago, when I was 21, and he was 24.  It was the usual story- met through work, friends for a little while, drunken snog in a nightclub, lots of texting and MSN messages, more drunken snogging, then eventually fully confirmed boyfriend and girlfriend, who hold hands in the street and have arguments about what to have for dinner.

I decided to tell him about vaginismus fairly quickly.  When we met, I was just about to start my first round of psychosexual therapy, and innocently thought the problem would all be over in a few weeks. So might as well tell my new boyfriend that this is happening but it's OK. I'm fixing it.  Even so, I was still nervous, and not really sure what his response would be.

I can't remember the exact words that I used, but I think it was all very matter of fact. I told him he could think about it, and let me know whether he still wanted us to be together.  The conversation was left hanging, and I went home. By the time I had got back to my flat, I had a text message from him, saying it was fine.

Unfortunately, my first attempt at psychosexual therapy wasn't very successful.  I was in the honeymoon phase of a new relationship, and our sex life was great (sans penetration of course). Vaginismus treatment is highly un-sexy, and I felt spending so much time talking about what was wrong with me, and attempting to use dilators, was actually spoiling all the fun I was having with my new boyfriend.  Eventually, it all fizzled out, but I promised my boyfriend that I would try therapy again, when I was in a better place to deal with it all.

Not long after this, my boyfriend and I moved in together, and our relationship continued to grow and develop.  We loved one another, and saw a future together.  Unfortunately, though, vaginismus was always hanging over our heads, and we became very good at just avoiding talking or thinking about it.  We discussed it now and again, usually if wine was involved, but the conversations were sad and stressful, and usually ended with one or both of us in tears.  So we stopped talking about it.  And along with that, stopped having any kind of sex.

When we decided to get married, I realised that I had to face up to this properly and really work hard to get better. My husband has his part to play in this too, but there were so many issues that were just mine.  So, in the year I got married and turned thirty, I started seeing my current therapist.  I started off completely focussing on my own goals, like being able to look at and touch myself.  But now, some way into treatment, my husband is starting to take a bigger role, and we're trying to get our sex life back on track. Penetrative sex isn't on our radar yet, but relaxing and having fun with one another is the name of the game.  Because sex is fun.  Or, at least, it should be.  And it was.  In our darkest moments, we always stop and remind ourselves how incredible our sex life was when we first got together, when we didn't give vaginismus a second thought. If we could do it then, we can do it now.

With vaginismus, it's very easy to forget about the other person in the relationship.  The woman who is suffering goes through all the physical pain, but my husband has gone through a whole load of emotional pain that I will never be able to fully understand.  The fact that he hasn't given up amazes me, reassures me and motivates me to keep on going.

Because I'm doing it for both of us.

We're doing it for both of us.