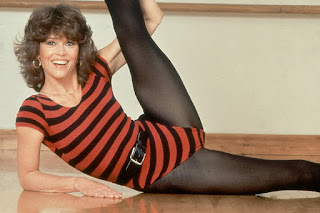 Please don't hate me, but I've always been one of those people who can eat whatever the hell they want, do no exercise and remain a slim, size 10 (US size 6).  If you do hate me a little bit, just remember I have vaginismus.  I deserve some good body vibes.

At high school, I despised gym class, and hid up at the back with my equally unfit friends, gossiping and pretending to have illnesses that prevented us from taking part.  During the 'swimming term', I had my period for 10 weeks, and then severe anemia.  See what I did there?  I'm pretty sure my gym teacher had heard it all before, but the lies worked and instead of exercising, I got to sit in a little room and copy passages from anatomy textbooks. Much more civilised, I think you'll agree.

Anyway, as I got a bit older, I noticed I was starting to make little complaining noises when I got off the couch. It also worried me that I was in my twenties and couldn't touch my toes.  My posture was awful, and I couldn't run for a bus.  Yes, I rocked a pair of skinny jeans, but, dear god, I was unfit.

Having not taken part in any physical activity for over 10 years (with the exception of drunk dancing in sweaty nightclubs), I was very intimidated at the idea of starting. The gym was out of the question, and going out running in the street was way too deadly embarrassing.  In the end, I convinced a friend to sign up for a beginners yoga course.  Start small, I thought. Build up some strength and flexibility, and maybe even touch my toes.  That's a start, right?  The first yoga class was nowhere near as awful as expected.  I was surprised to find I actually quite liked it.  My friend gave up after a couple of weeks, but I was hooked, and so began my (now very deep) love for yoga.

Since taking up yoga, I have noticed amazing changes in my body.  I am stronger.  I am more flexible. I sit up straight ALL THE TIME.  And yes I can touch my toes.  I was so impressed with my own body, and amazed at how quickly it adapted and changed, that this has now spurred me on to join a gym.  I have only just joined, but have had the confidence to go into scary exercise classes on my own, lift weights, run in front of people... and, again, I have been amazed how quickly things progress.  My arms can lift things that I never believed they could.  My legs can run for longer and longer periods of time, with each gym visit.  My core can just about hold it's shit together and keep me in plank for more than 10 seconds. Every time I exercise, I see a difference.

Now what, in the name of Jane Fonda, does this have to do with vaginismus, I hear you ask? Well, if you haven't already sussed this, vaginismus treatment (specifically dilators) are EXACTLY THE SAME as exercising.

Before I ever attempted to insert one, I was terrified, embarrassed and ashamed with my body's lack of flexibility.  Just like before I went to my first yoga class.  However, after trying it and seeing it isn't that bad, I persevered and, of course, it got easier.

And, just like with yoga and the gym, I have been amazed yet again by my body.  My vagina, which previously went into meltdown if I so much as thought about putting my finger near it, can now relax enough to accommodate three sizes of dilators (D0-D2) and about 1/3 of D3. (Yep.  That happened today! Woop woop!)

I now realise that, back in the younger days, when I abused my body with bad food, too much booze and no exercise, it was never going to able to work in sync with my brain and overcome vaginismus. Since I started treating my body a bit better, it's started being a bit better to me too.  It's working with my brain now, and suddenly we're seeing results.  Long may it continue to amaze me!