The Vaginismus Dance- one step forward, two steps back, take a deep breath, move on

So to counter my last post, which was brimming with joy and positivity (and maybe even smugness), I thought it was important to reflect on the fact that vaginismus treatment isn't all plain sailing.  There's a real element of one step forward, and two steps back. 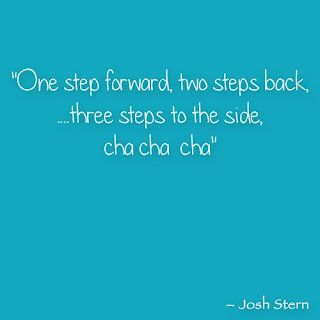 As avid readers of the blog (or fellow sufferers) will know, vaginismus treatment consists of a variety of steps, that aim to get you familiar with your vagina, and comfortable with inserting things in to it. The end goal is a penis, of course.

I am thirty years old, and the first time I ever inserted anything into my vagina was 3 weeks ago. It was the smallest dilator in my kit (D0) and it was the strangest feeling ever.  A mix of disbelief, excitement, mild discomfort and pride.  It happened in the bath, and I sat with it in me for a few moments, before yelling for my husband to come and look.  He ran into the bathroom and we just stared at it for a while. It was inside. WOWZER.

I progressed quickly to the next dilator, managing to insert it the following day.  However,  this was not easy, and caused burning and stinging.  I persevered though, determined to get it in, and wincing through the pain, I managed to push it right in.  It felt like I had stuffed an arm up there- it was agony, uncomfortable and did not feel natural.  Reluctantly I pulled it out, and saw the white plastic of the dilator was covered in bright red blood.  Panic set in, and I ran to the bathroom to try and work out what the hell I had done to myself.  Even after establishing it was probably just my 30 year old hymen breaking, I still couldn't celebrate the fact that I had got D1 in.  The blood, and the pain, were too much, and sad reminders of how far I had to go.

I stuck at it though, and eventually D1 became painless and easy.  It glided in effortlessly, and I could sit with it my vagina in while answering emails, making phone calls and watching tv.

Time to move on up.

D2 was a different beast altogether.  The first time I tried to insert it, it hurt so much I could only get the tip in.  Having learned my lesson about pushing through pain, I stopped and gave up for the day. Each time I tried D2, I noticed tiny bits of progress.  I got it halfway.  Then 3/4 of the way.  I was pleased, but also frustrated. Why wouldn't it just go in? My brain so badly wanted it to, but my vagina and PC muscles just wouldn't comply.

3 days ago, I finally conquered it.  It went all the way in. But much like my experience with the first time I fully inserted D1, the pain and feeling of being burned and stabbed was unbearable.  Knowing what was coming next, I reluctantly pulled it out and, of course, it was covered in blood.  I traipsed to the bathroom, cleaned myself up and wore a sanitary towel for a couple of hours.  By the time I left the house, later that evening, the bleeding had stopped and there was no trace of what had happened.

But the memory is still in my brain, and I haven't touched the dilators since.  I'm psyching myself up to get back into it, because I don't want to give my brain time to feel the fear and let all the old anxiety about inserting worm it's way back into my mind.

I just need to keep telling myself, that this happened with D1. But now it's fine.  It's now happened with D2, but it will be fine after a few more tries.  It will almost definitely happen with D3 and D4 but this just seems to be part of my process.

Still a long way to go. Still more pain ahead.

One step forward, two steps back.

But eventually I'll make it.