THE GREAT THERAPY BALANCING ACT starring me, the husband and the therapists 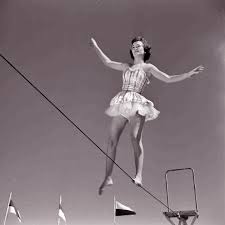 I have been seeing therapists on and off for nearly ten years, in an attempt to cure the dreaded vaginismus.

I have been very lucky in the past to have been offered two separate rounds of therapy on the NHS.  The first therapist I saw, while I was still a student, was the person who introduced me to the word 'vaginismus'.  I had gone to see her as I was having issues with my then boyfriend touching my genitals. I was starting to feel uncomfortable about it and avoid sex, so I decided to mention this to my GP. The GP didn't seem to know what was wrong but suggested a sex therapist would help.  As anyone with any weird condition will testify, being diagnosed and finding out it's not just you, is a massive relief but in the case of vaginismus, also terrifying.  A quick google search brings up stories of pain, dilators and crushing frustration.  I wasn't quite ready to accept that this was really happening to me.  I avoided the tasks set by my therapist (which I sarcastically referred to as 'homework').  I skipped appointments, telling myself I was too busy to deal with this right now.  And gradually it slipped under the radar, and I gave up.

Years later, and in a very serious relationship with the man who is now my husband, I decided to give self-treatment a go.  I found www.vaginismus.com- a site that sells a treatment programme, complete with different dilators that are inserted into the vagina to help you grow accustomed to having things inside you.  I bought the kit, full of enthusiasm, but when it arrived the dilators looked a bit... big. Impossible actually.

Cue more avoidance and the dilators finding a new home in the back of the wardrobe, along with the hand mirror.

I did manage to get another therapist on the NHS, but fell into the same trap of prioritising everything else in my life over appointments, and eventually giving up because the therapist suggested I go for a vaginal exam. That was NOT going to happen.  Hello avoidance, my old chum.

Now, I have started with my third therapist.  This time I decided to go private, and pay for sessions, in a hope that handing over my own money would make me stick with it.

However, it feels completely different this time.  I actually look forward to sessions, and am more open and honest with my therapist than I have ever been.  I have been religiously using my dilators on a daily basis, and have conquered the smallest size. It's only the length and width of a finger, but this is the equivalent of a normal vagina accommodating a cucumber.  MASSIVE!

The fine balancing act now comes with trying to maintain some intimacy with my husband and not becoming self absorbed.  Yes, vaginismus is MY problem, and my issue to overcome, but it's a team effort and I can't fall into a trap of being the only person allowed anywhere near my vagina.  This is something I am finding hard at the moment, but with the help of therapy and hard work I will overcome.

If I managed to get a metaphorical cucumber up there, I can do ANYTHING, right?